For Stupid Turkeys, They Sure Aren’t Dumb

This past weekend I got to spend time with my bride and really close friends at the Star B ranch in Texas.  It has quickly become one of my favorite places on this side of Heaven.  There is something so beautiful about that slice of hill country to me that I just cant explain.  The rolling hills and sharp drops into live oak bottoms, surrounded by flats covered in blue bonnets just has this flatlander in awe each and every time I visit.

Last year we arrived at the Star B and immediately were on birds.  The first afternoon we had a turkey try to slip in and I handed my gun to Jordan, the cameraman, and he laid him out.  We needed a morale boost after being whooped in North Texas.  The next day we proceeded to harvest 7 longbeards and life was good.  Due to that phenomenon, we had extremely high hopes for this year's hunt. 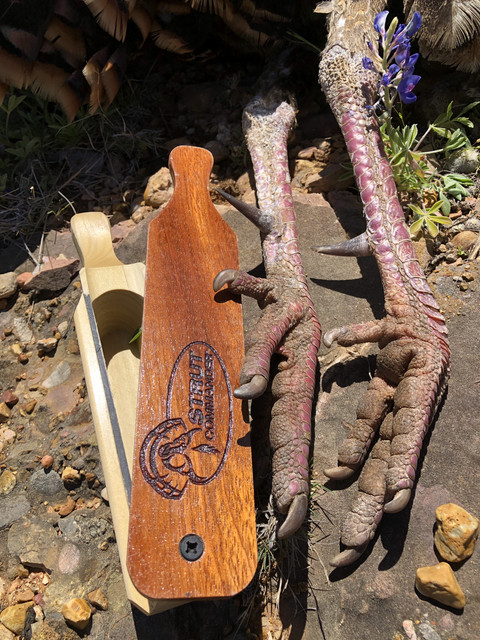 Fast forward to this year.  I invited David Blanton and his wife Lisa to join Brittany and myself for what I was sure was going to be a wild west shootout at the Star B.  We all arrived Thursday afternoon and couldn’t wait to start the hunt.  After talking with Brad Brookshire, Leroy and Jim (the ranch owner and staff respectfully) we hatched a plan.  Brittany, Jordan, Ben (United Country Agent and ranch family friend) and I struck out for the north side of the ranch.  We set up quickly on a spot that we had success the year before.  After hearing no gobbles we just sat down for a bit to see what might happen.  About 10 minutes later, we heard a strange sound from a turkey.  I immediately called and he gobbled.  We could hear him drumming so we knew he was close.  About that time I saw movement out of the corner of my left eye.  He was coming in directly from the truck.  He walked in from the side so we had no footage at all of him.  We decided to pass as we were there to get turkeys on camera and not just hunt.  Little did we know that would be the theme of the weekend.

We let that bird walk off and decided to try and get around him.  We knew he was headed to roost so we at least wanted to know what tree he was going to.  We made it around and put him to bed.  He should be an easy foe for the next morning.  After returning to camp and talking to everyone, we hatched a plan for the morning.  David, Lisa, Brittany and I would all start on a bottom where they put several birds to bed.  They went towards one set and we went towards another.  We got set up and it was unreal.  The birds were gobbling on the limb with every breath.  It was incredible!  The birds flew down and put on quite the strutting demonstration about 80 yards out.  While we were just sitting there watching them I caught movement to my right about 30 yards away.  Two quiet gobblers come right in.  They stood there and looked for just a minute before easing back off.  It could’ve been at least one dead gobbler but again no footage of them (noticing a pattern yet?).  The other 4 longbeards continued to strut and gobble and were working their way towards us.  While still enjoying the show, all of a sudden the sound of spitting and drumming approaches from behind us.  He is 15 FEET from Brittany and she cant see him and neither can the camera.  I thought he was going to walk into her gun barrel.  He decided to ease on off but not before the other 4 came in range.  Once they crested the rise and saw him, their whole attitude changed.  There was no doubt he was the king down there.  The 4 turkeys ended up walking off.  The next morning they would meet their maker or so we thought.  Turkeys were still gobbling so we decided to continue to chase some fresh birds.  I will save you the boring details but will tell you it seemed we had a 50 yard force field all the way around us for the remainder of the day.

The next morning we were set up back in the bottom where we were the first morning.  We got in early and got the Higdon jake and breeding hen decoy set up.  We knew we had to operate quickly as big rain storms were headed our way.  Like clockwork, the birds put on a gobbling display on the limb.  The group of 4 was now down to 3.  They flew down with a hen and of course didn’t come up the road like the day before.  Instead they circled beside us to 15 yards.  The camera nor the hunters could see them.  All hope was not lost though because the king was still on the limb in front of us.  A few soft tree yelps from our Double Trouble pot call and he flew down and immediately went quiet and did nothing but strut.  The good thing was he was strutting right at the decoys.  Brittany then sent some Hevi-Shot his direction from her 20 gauge and the king’s reign was over.  As soon as she lifted him from the ground I knew I was going to have to break a rule of mine.  We were getting a turkey mounted.  His spurs measured almost 1 ¾ inches and he was just a great looking animal. 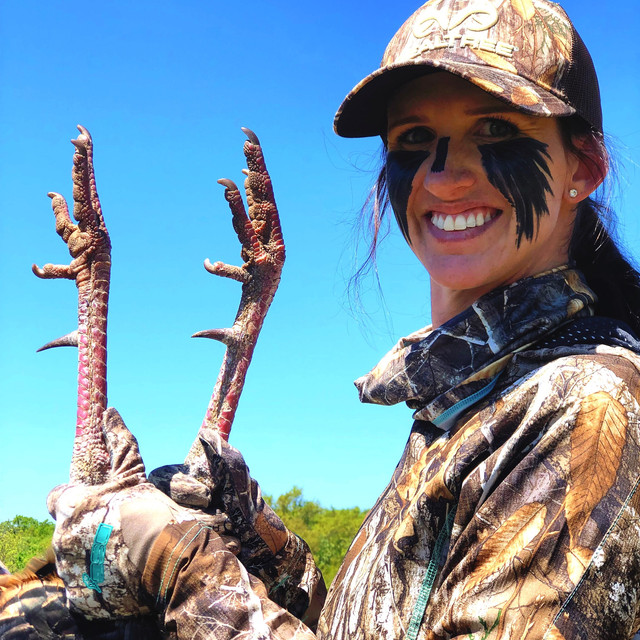 Right on cue the rain and weather came and we were locked indoors for a little while.  The rain and all finally broke so we went out late that afternoon to try again.  We set up close to where we roosted the bird the first evening.  The wind was blowing 30 and it was 45 degrees, absolutely prime conditions for turkey hunting said no one ever.  We hunted until legal sunset and were frozen.  We were calling every 15 mins for some reason.  When sunset approached we stood up and stretched.  While stretching Jordan caught movement to the right.  Wouldn’t you know it, 4 gobblers at 60 yds and coming towards us but there was nothing we could do about it.  You seriously cant make this stuff up. 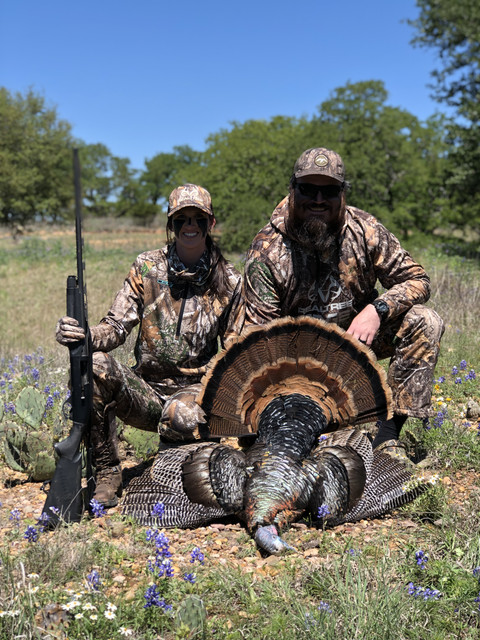 The last morning we went to where the birds had been roosted and they were gone.  It didn’t make sense because they had been there every day.  We heard some gobbling back up the hill so we made a move.  Wouldn’t you know it, it was our three guys.  They had moved up the bottom and used the dam from the lake as some extra protection from the high winds that night.  While approaching them on the limb, I knew they were close but I didn’t know just how close.  We were waiting on them to gobble again to know where exactly to set up and sure enough they did just across a small rise.  The only problem is those were not the three amigos.  They were different birds.  We were standing under the 3 amigos and had no idea.  You know what happened next.  It sounded like the roar on 18 at Augusta for Tiger.  I then went and changed my pants from a small accident caused by the ruckus (joking but it made me jump no doubt).

We doubled around to their buddies that were gobbling across the rise.  While trying to set up we were interrupted by other gobblers walking our way.  We moved to get in front of them and wouldn’t you know it they came right where we had been.  The lead bird came up and looked at the decoys at 30 yards (no footage because of brush) and we had to let him walk on by.  Then two of the birds from the bottom worked their way up to us and just walked and strutted 45 yards away in some brush (very little footage and tough to find holes for a shot).  It was at this point Jordan looked at me and said “For stupid turkeys they sure aren’t dumb.”  We decided it was time to head home and regroup.

The 6 ½ hour drive home gave ample time for some reflection.  It was during this time a verse came to mind, “When pride comes, then comes disgrace, but with humility comes wisdom” Proverbs 11:2.  I went into that hunt with nothing but pride and an assurance the hunting would be easy.  It proved to be anything but that with the cameras involved.  If we were just a husband and wife turkey hunting we could’ve harvested lots of birds and left feeling like we knew what we were doing.  Instead we tried to let you guys see our hunts and enjoy the same sights and sounds we get to see in the outdoors and we wouldn’t have that any other way.  My job in part is to promote the outdoors in a positive light and encourage more people to spend time afield.  This is a job I don’t take lightly.  I want everyone to see how much fun you can have pursuing wild animals with the ones you love.  I was overall unable to do that but some of yall have had these same frustrations so I wanted to share that with you.  We often times only show/talk about the “successful” hunts.  I used quotations there because I now realize this was one of the most successful hunts I could have had.  I got to spend three days with my wife, Brittany, and great friend/cameraman Jordan.  I finally was forced to learn the birds and lands of the beautiful Star B Ranch.  I got to fellowship with a great friend/mentor/brother David Blanton and his wife Lisa.  I enjoyed candies on my pillow every night from Greg “Two Chains” Thompson.  I got to know Brad and his son Cliff even better than I did before.  I enjoyed Mrs Rosie’s cooking and the company of Jim and Leroy.  I learned more about the Rio Grande Turkey than I have learned in the previous 5 years of hunting them.  As a whole, we tend to lose sight of what a successful hunt is.  It is not always tagging out and high fiving.  It is investing in other people’s lives and the thrill of the chase.  It is 5 am coffee pot conversations and 10 pm game plans being made.  It is stopping to take in the beauty of the sunrise or the sky after a storm has passed.  The opportunity to chase the animals is the success.  The harvesting is the result of hard work and little bit of luck. 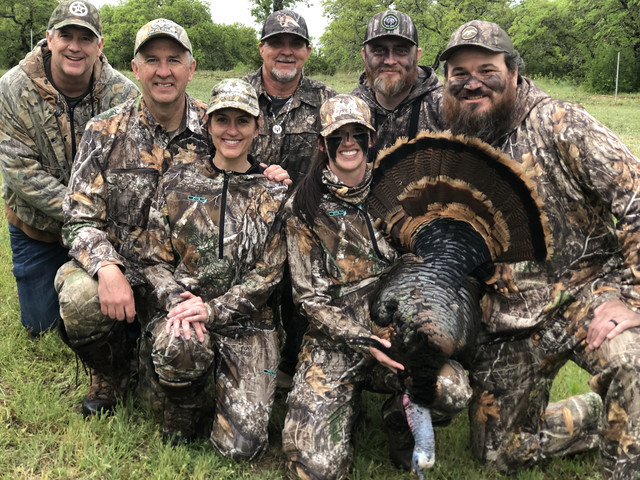 Thank you Lord for a safe hunt and the ability to learn from frustration.

Thank you for the friendships that formed and strengthening of those already established.

Thank you so much for the opportunity to do it just one more time.