Friends, Family and the Outdoors

All weekends are nice, but when your wife tells you that she wants to go archery hunting, now that’s special.

My wife, Paula, shot her bow with me for years in the yard but never actually hunted. Mainly because we had a daughter at home. Well, the daughter is grown, so Paula has decided that she wants to archery hunt now. Last year, she got backstraps so she’s hooked.

We had planned this weekend for a while with my good friend, Jeff Smith. He owns Leland Lures and is an avid fisherman and hunter. I travel a lot on weekends with speaking events, so finding an open weekend was a task.

Paula had a baby shower on Saturday morning at 11, so we left at 2 pm. After driving 3 hours, we met Jeff in the woods and were in the stand by 5:45 pm. We had to change stand locations because the wind wasn’t doing what the weather app said it was doing - go figure. We spooked a couple deer going in, which we thought wasn’t good, but made it to the stand and settled in. Not long after that, a doe popped out and grazed her way around us.

Then, a 7 point came out into the clearing. A young man with a lot of potential. It’s fascinating to see how they react to one another. Pinning their ears back at each other. Then suddenly, the doe got up on her hind legs and hit the buck right on his nose. Now I know where the term “doe popped” comes from. A couple more does cross down the way and darkness falls on us. 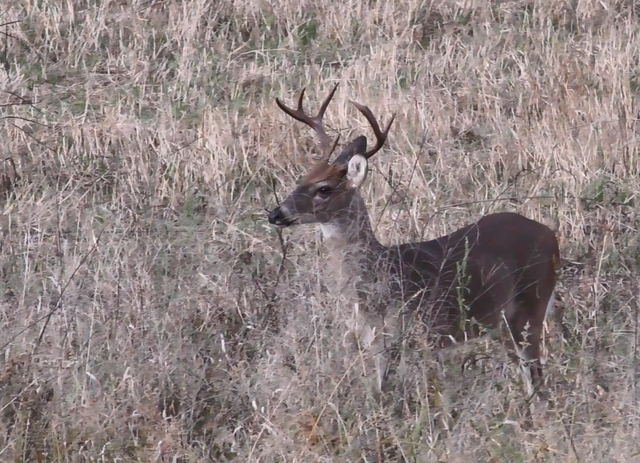 Back at the camp, we ate supper and watched football until bedtime. The next day, we slept in. It was a full moon, so the middle of the day and evening was the best time to hunt. When Paula woke up, Jeff and I were kicked back in the easy chairs looking at trail cam pictures. Paula asked, “What do we need to do?” Jeff replied, “Kick back in that easy chair and take a nap.” Anybody that knows Paula knows to sit still is a chore for her. She surrendered though and lounged around. After a while, she turned to me and said, “I get it now.” I said, “What do you mean?” She replied, “I see why you love it so—Just taking it easy and escaping, seeing nature. You see things out there that most people don’t get to see.” That’s so true.

When it’s time to get on the stand, we go to a different stand than the night before. Jeff saw a nice buck on his trail cam, so we were going after him. We were in a beautiful spot at the end of an oxbow lake and the wind was perfect—right in our face. There was a field in front of us with a little stretch of woods between us and the lake. This is perfect, I thought.

Suddenly, Paula said, “Deer!” I looked and it was him—a 12 point. He walked in front of the stand but the shot was out of her comfort zone. Silently, he slipped on across. He stopped now and then to look around, and licked his nose to taste the air. Later, a few does and a coon crossed. A fox squirrel tried to jump to a limb above us but missed and fell to the ground right under the stand. He jumped up and took off like nothing happened. I was thinking if I did that, I’d still be laying there.

The day ended with water splashing behind us and the sound of horns ticking. This went on for a solid 5 minutes. Then they got serious and really made some racket. Paula said, “Geeze, Louise!” I smiled because I knew the woods were grabbing her heart. God’s creation is awesome, and He showed out for us that night.

The next morning, we went to the same stand as the night before. Several deer crossed behind us before daylight. After the sun rose, we didn’t have much luck. We decided to head back to camp and relax. After looking at a trail cam pic, we decided on another stand due to the wind change. It’s crucial to have the wind blow your scent away from crossings, or your chances of seeing a deer go way down. 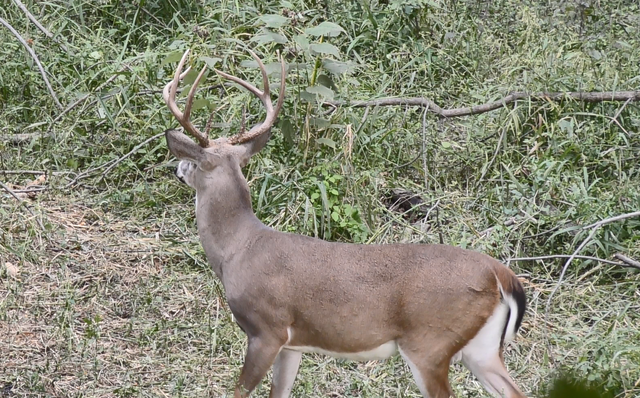 We settled in early. We were in a buddy stand where you sit side by side. After 45 minutes into the hunt, a yearling walked by us. I mean, right by us. We could have dropped something down on it. Then another, and another coming from behind us. They grazed around in front of us at about 25 yards. Then, an 8-point buck came in. “Stand up,” I say. “This may be it.” He’s wide, but not very tall. He had a big body. He came in closer, then looked to his left—our right. Then, he started walking the way he’s looking. Dang, I thought. He’s going to skirt us. He walked a little further and then stopped to hook a bush. He started to make a scape and hooked the bush some more. Suddenly Paula said, “There’s another Buck.” “He’s bigger,” I said. “They’re going to fight,” she whispered. But, the bigger buck paid no mind and came right to us. I started shaking, but Paula was focused. The buck was at 25 yards, but he turned and quartered away. 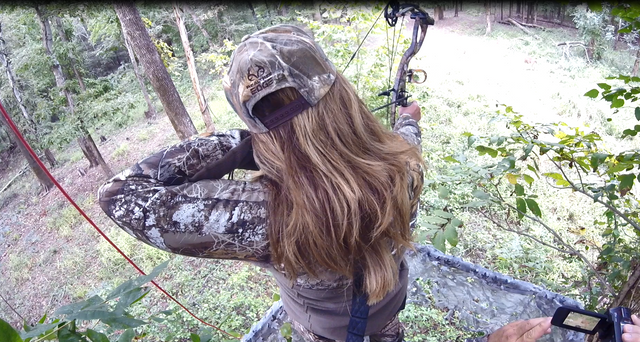 Paula drew and let her arrow loose after a second. I heard a thump and the buck was off in a flash. I turned to Paula. “I may have hit him a little too far in the back,” she said. “Not with that angle,” I replied. Paula looked up and started pointing, “He’s down! Right there, he’s down!” Paula had her buck. Wow, the smile that was on her face—the excitement in her voice—it was an experience. I can’t put into words the feeling that I got from seeing her.

It wouldn’t have happened without a Creator who loves us enough to create a place for us that’s so awesome. I’m blessed to have good friends that loved us enough to share their time and resources. And, most importantly, I’m blessed with a loving wife that supports me and loves the things I love. It not only makes me better, but it makes us better and more inseparable. What a weekend! 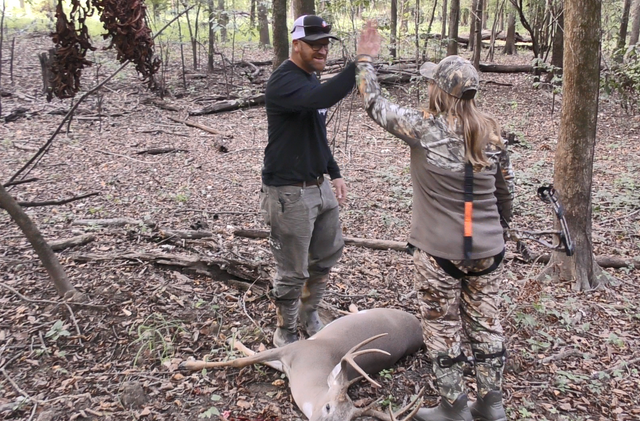