Deer Hunting Ain’t so Bad After All

My time at Seven J Outfitters in 2019 has come to an end. Like always I like to use my flight from Rapid City to Dallas to really reflect on the week. As I type this, I don’t think the magnitude of the week has fully set in. In my 6 years of coming here, this one without a doubt has been the best and not just because of the deer hunting.

I came into this week with a completely different mindset than I ever had before. In the past, I had always focused on making sure we made a show for you guys to watch. I would have myself wound in knots the weeks leading up to this hunt. Was I practicing enough? Would I be able to keep my composure when the time came? Would I make the shot? Would I represent my partners well? The list goes on and on. This year I made up my mind to just come and have a good time and let whatever happened happen. I know that doesn’t sound profound at all but for me it was.

Let’s tear down the fourth wall for a second. I’m about to be as honest as I have ever been about things pertaining to deer hunting. I have always had a healthy respect (bordering on fear) of treestands. Being 6’ 4” and 270 pounds they made me a nervous wreck each and every time I climbed in one. This year I decided that anxiety wasn’t going to eat me alive. I prepared mentally and was successful. Now that’s not saying there weren’t moments where it crept back in, but overall I was at ease mentally in the stand. Now another thing, I was downright scared of mountain lions. We don’t have those things down south. They aren’t small and I’m not fast. It was a legitimate concern of mine. This year I just said ultimately there’s nothing I can do about it so just roll with it. That was a huge mental hurdle for me to climb but I did. Those two things took so much mental pressure from me that I was able to just hunt and enjoy the moments. It was freeing. 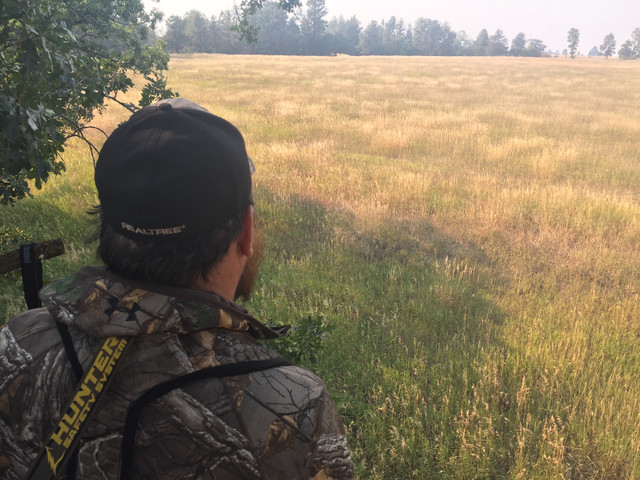 The first morning hunt would prove to be a little slow. The first afternoon was anything but that. David took an absolute giant of a buck while the rest of us dodged thunderstorms. Kip even had to dodge hailstones coming down from above. 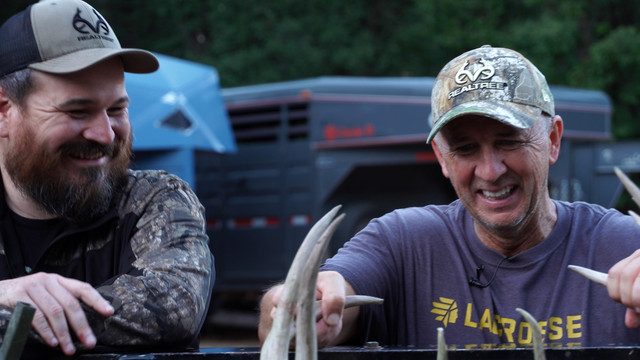 The next morning we had a great hunt. We saw 4 mature deer that I would’ve been happy with placing my tag on. We even put up a new stand for the next morning. That afternoon though, things would get western in a hurry. Kenny, Stephen and I headed to a different farm than we hunted that morning. We got there and didn’t like the setup for the ground blind. The only option we had was the same stand David had killed out of the night before. We said heck why not.

We climbed in the tree and began to get setup. Before we could even get our camera and bow up the tree a shooter stood up out of his bed on the bank of the river. Stephen told me to get ready and I was like bro all of our grip is on the ground. He said well get it up here. When the buck would feed, I would race a rope up the tree. The deer was only 40 yds at this point. I finally got everything up the tree and was ready. The buck walked our way. He presented me a 17 yd quartering away Shot. That would be all I needed. He went less than 40 yards and it was done. 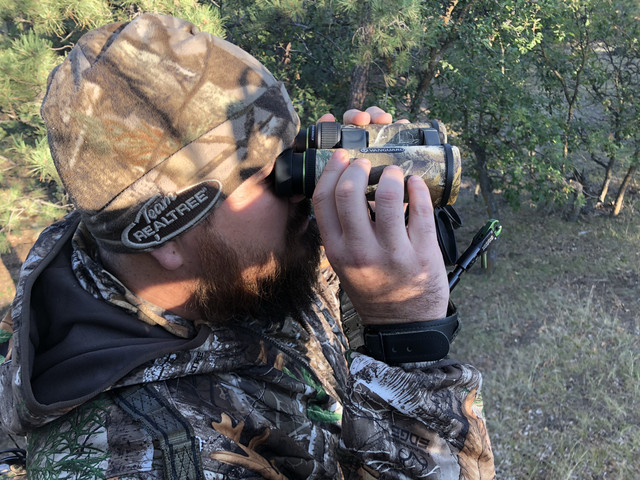 When we walked up on him, I had no idea just how big he was. My largest deer to date was on the ground. I was in disbelief, shock, awe and every other emotion you can imagine. His body was the size of a Midwest deer. He was just an old big bruiser. He roughed at 153 inches and helped feed 25 folks.  He also gave me a whole new respect for deer and deer hunters.

WHAT JUST HAPPENED? Thank you Lord for the opportunity for such an amazing animal! He’s my biggest deer ever. I’m so thankful for @realtreeoutdoors and @sevenjoutfitters for having me the last 6 years. Thanks to my bride @brittanym343 for supporting me and this crazy life. Thanks to @mack_nelly for laying down some amazing footage. Thanks to @davidblantonrt for inviting me and being a great friend/brother/mentor! I can’t wait til y’all see the story behind this one! #realtree #huntwithanedge #yeti #vanguardoutdoors #hoytbowhunting #qalo #magellanoutdoors #mtnops

This hunt/experience couldn’t be done without a whole host of folks. First thank you Lord for the path you have laid out before me. Thanks to my wife Brittany for continuing to support me living this crazy life. Thanks mom and dad for raising me like y’all did. Thanks for every butt whooping you ever gave me. I deserved em all. Thanks to my grandparents for praying for me all of those years. They worked. Thanks to Bill, David and everyone else at Realtree for continuing to support us. Thanks to Willie and Korie for letting me do these types of trips.  Jeff, Deb and everyone else at Seven J y’all are awesome! Kenny, we began our relationship as guide/hunter and I’m so glad to call you a brother now. Thanks for pushing me to be a better hunter and man. The McNelly family, y’all are awesome. Stephen, thanks for challenging me mentally, spiritually and physically to be the best man I can be. Bethani, GR and Hunter thanks for letting me borrow your husband/dad a week each year. To all the other partners (Vanguard Outdoors, Academy, Mtn Ops, Yeti) thanks for believing in me and supporting this way of life. I was shooting a HOYT Carbon Spyder with Rage Hypodermic broadheads. I’ve been using this setup for 6 years now and it works for me!

A final word: "Be strong in the Lord and in his mighty power. Put on all of God’s armor so that you will be able to stand firm against all strategies of the devil. For we are not fighting against flesh-and-blood enemies, but against evil rulers and authorities of the unseen world, against mighty powers in this dark world, and against evil spirits in the heavenly places. Therefore, put on every piece of God’s armor so you will be able to resist the enemy in the time of evil. Then after the battle you will still be standing firm." -‭‭Ephesians‬ ‭6:10-13‬ ‭